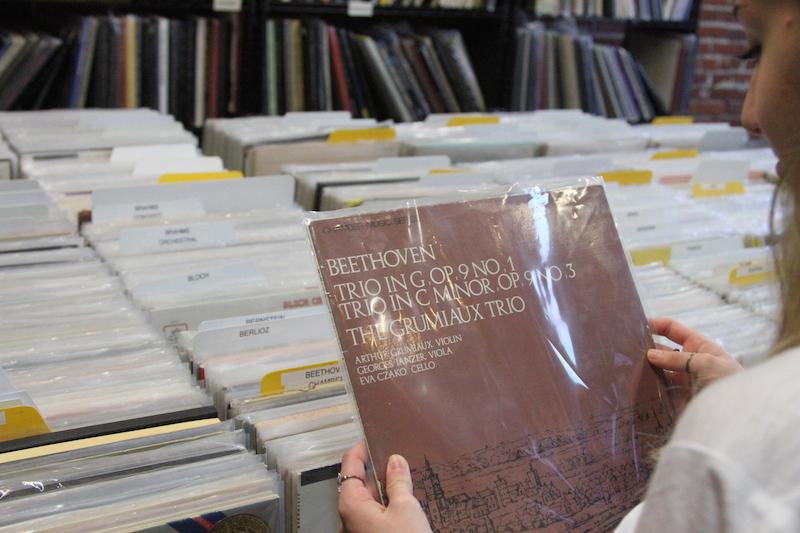 The Comeback of Vinyl

A look at the newfound vinyl revolution

Vinyls aren’t just for hipsters anymore. They’re back and they’re here to stay.

Vinyls, or records, were the main source of at-home music listening for decades. When cassette tapes and the Walkman became popular in the early 1980s, vinyls all but fell by the wayside.

And once computers became more accessible in the 90’s, streaming music became widely popular, and continues to be to this day. By this time, one would figure the “traditional” ways of listening to music would not be practiced any longer, but vinyl has made a surprising comeback over the last 10 years after almost becoming obsolete.

Among several stores that sell records in the Kansas City area, Vinyl Renaissance & Audio is a popular store in downtown Overland Park.

“We probably have a collection of fifteen to twenty thousand records,” store owner Dan Phillips said.

If one is interested in starting a record collection, it may seem overwhelming at first, with the wide variety of record players there are to choose from, and the decision of which record to purchase first to start a collection.

“Start with a normal $100 setup. We don’t get too excited about people buying those, but it’s a start,” Phillips said.

Although a standard record player does cost about $100 advanced set ups can cost anywhere from $300, to upwards of $1000.

“You get an equal benefit with a more expensive setup,” Lucas Bell, an employee, said.

It may be surprising that vinyl is becoming more popular, amidst more accessible ways to listen to music, but some say that listening to music any other way is just not the same.

“Analog records will cover all of the audio frequencies and give the best representation of  both voice and instrument, second only to a live performance,” Bell said.

Record collecting is not exactly a cheap endeavor. The records themselves range in prices based on the music in question, but new releases will likely cost between $20 and $25.

“Always, with us, check in the back for our $2 stuff. If we’ve got too much of something, we’ll throw a bunch of it back there that may be in perfect condition,” Phillips said.

Sorry, there are no polls available at the moment.

Vinyls are extremely fragile, and should be handled with a steady hand. It is also recommended that you purchase cleaner for your vinyls, too keep them looking and sounding nice.

Although records can be purchased online, Phillips does not recommend doing so.

“You pick up a lot of knowledge from people in here that have been working with music for 30 years. It’s stuff you cannot fare out online. I can take you in the back and introduce you to Wacky Frank, who knows every detail about rock bands from here to eternity,” Phillips said.

“If you’re ordering from Amazon, you’re getting an order that’s processed by someone that’s an IT guy. People that work in stores like this, know what’s on these records, what they are.”