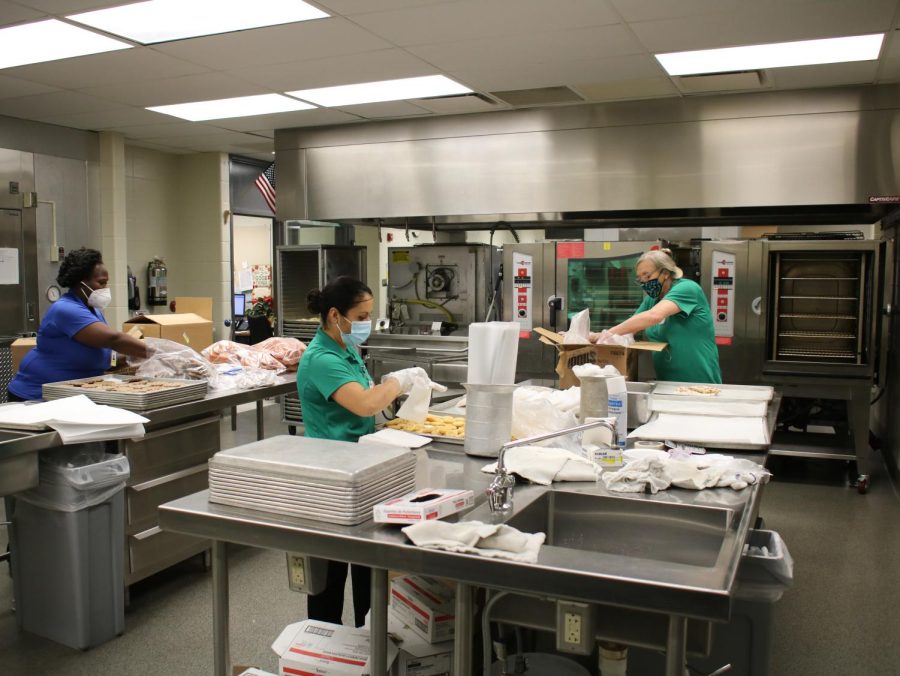 This year, millions of people have quit their jobs. A common name for this is “The Great Resignation”.

The pandemic forced many jobs to be done through computer screens, and now many people seem to not want to go back to work. Many of these newly unoccupied roles are in jobs that were deemed “essential” and kept open while the rest of the workforce was at home: food service, retail, and maintenance and custodial work, for example.

The shortage of workers has affected everyone, including students and staff at schools. Many students work at the jobs most affected by this or have quit jobs themselves. And shortages of custodial and cafeteria staff have affected the district.

Jennifer Silverstein, an administrative secretary, said that the district has been having trouble hiring for both positions and that new hires often find the job too difficult. The employees hit the hardest by this have been food service and custodians. The district moved several employees to elementary schools and some employees also quit during this time.

“We are definitely feeling some of the after effects of the pandemic,” Silverstein said.

Reta Toliver is the head of food service at West. She lost many of her team during the pandemic.

“We went [on] spring break and came back. At that point, when we did return
for the school year in August, I was a one-man kitchen staff, during remote. We were hoping the following school year, we would be fully staffed,” Toliver said. “I was fighting to get my staff back. When I started with this district, there were eighteen women in the kitchen and it slowly dwindled down to fifteen. After COVID, I’m lucky to work with at least eight to nine people in my kitchen on any given day.”

The district attempted to replace the staff.

“Job fairs were offered and the turnout was very low. I’ve never seen such a low turnout to apply for positions,” Toliver said. “Personally, I feel like if we were offered more money at starting positions, we would get better quality of staff. Because right now, they’re not paying enough, especially when that person can go to a fast food restaurant and make more money than here, working for food service.”

The same is true for custodial staff.

“It’s just a district wide thing,” custodian Cole Adams said. “People get pulled from our school to go to other schools to fill in. Some got moved to other schools because people either got sick or quit their jobs or got moved around.”

The loss has been difficult for the remaining staff.

“We lost five or six of our custodial staff. That’s not ideal for us because we want to have people here that know the building and can clean it and keep a good product going out that the teachers appreciate,” Adams said.

Just like with custodial staff, fewer people in the cafeteria means the job becomes harder for remaining employees.

“The students are not getting the best quality, I feel, that I’m capable of. That’s where so much of the pre-packaged food comes in; to save on labor hours,” Toliver said.

The food service shortage affects other staff as well.

To cope with having less staff during lunchtime, the school moved from three lunch periods to four. According to Toliver, this has both advantages and disadvantages.

“The four lunches are a blessing but we still do not like to cook everything at the beginning of the day and keep it in a warmer and serve
it to the last student in that fourth line.
We try to cook to line. There’s cooking, there’s prepping, and there’s cleaning [and] we’re trying to follow all the rules and regulations,” she said.

Toliver and head custodian, John Taylor are both retiring at the end of the year. Toliver has been with the district for eighteen years.

“It used to be that Shawnee Mission was the best district to work for,” she said. “There was a waiting list. It took me a while to even get employed with Shawnee Mission School District.”

“A lot of different superintendents that have come through, the big turnaround is always with food services and custodial. We get hit the hardest. When you start stripping away at the bottom, who’s holding the school up, then the turnaround is affected and we’re always the ones who are hit first.”

Adams and Toliver were both unsure about what the future holds for the staff. “We can’t fret about the future because we don’t know it,” Adams said. “You hope

it turns around and people start lining up at the door and say ‘okay I want to work, I want to start helping you guys out’. It does stink at times, but you just gotta keep chugging along and I think it will turn around. I think things have progressed but you never know.

For Toliver, things can’t go back to normal without some changes.

“I’ve always been that person that saw the glass half full. Right now, the morale is so low and we need the administration to encourage us more and put employees first,” she said. “I was here and I’ve seen the good, the bad, and the ugly; and any administration that came in and praised us and told us we were doing a good job, that’s when people will give you one hundred and ten percent. It can get better but you’re going to have to see peoples’ worth and value that work.”

Along with schools, students have been individually affected by the shortage if they are part of the workforce. One such student is senior Alena Morris. She’s been working as a host at a restaurant since September.

“I started because my friend worked there. I’ve never had a job before so [I wanted] experience,” she said.

Alena is planning on joining the millions putting in their resignation. And part of the reason she gives is the fact that her work is already short-staffed, making the work much more difficult for everyone left.

“I haven’t worked there [when] it wasn’t short staffed,” she said. “Being short staffed means a lot of people have to pick up the slack. I’m a hostess, I just sit people down. But since we’re short staffed, I’ll end up giving people their chips, taking their drink order”.

Junior Alex Crowell recently quit his job at another restaurant. Like Alena, his workplace’s short staff made more responsibility fall on the people left behind.

“They’re still understaffed. I think they’re supposed to have somewhere around twelve people on the schedule and we only had seven. So, everyone has to pick up shifts,” he said.

This meant that he had more pressure from work.

“I was getting way over-scheduled,” he said. “I was getting scheduled five nights
a week and closing every night. I was a primary closer within my first week there. I didn’t have any time to do homework after school.”

Alena quit due partly to some issues with the pay and management.

“Sometimes they’ll ask me to go home because they don’t have the money to give me $10 an hour, or they’ll have me log on as a trainee, which makes $7.25,” she said.

After quitting, both Alena and Alex said they would want to try a different type of job.

“I would absolutely do retail,” Alena said.

Along with the increase in work from being short staffed, dealing with customers can be difficult.

“I got screamed at once because I shorted someone a dollar. Everyone’s just super rude to people. Someone would order like seven pizzas and they wouldn’t tip anything and then walk out without saying bye. I would say like ninety percent of the customers I interacted with were rude somewhat,” Crowell said.

If the current data trend continues, the employment numbers will return to their normal level. But, the long-term impact of this current shortage has yet to be seen. 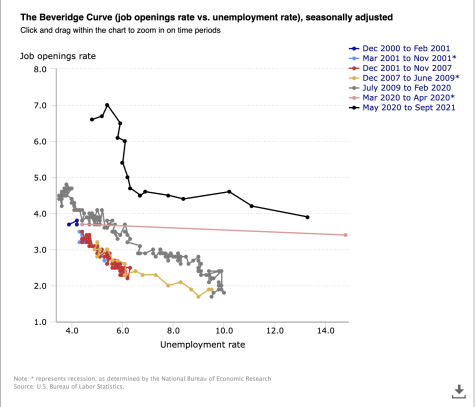 This graph shows the rate of unemployment versus the number of job openings over time. While the numbers have decreased since earlier in the pandemic, they still remain higher than previously.
These statistics are available via the U.S Bureau of Labor Statistics.