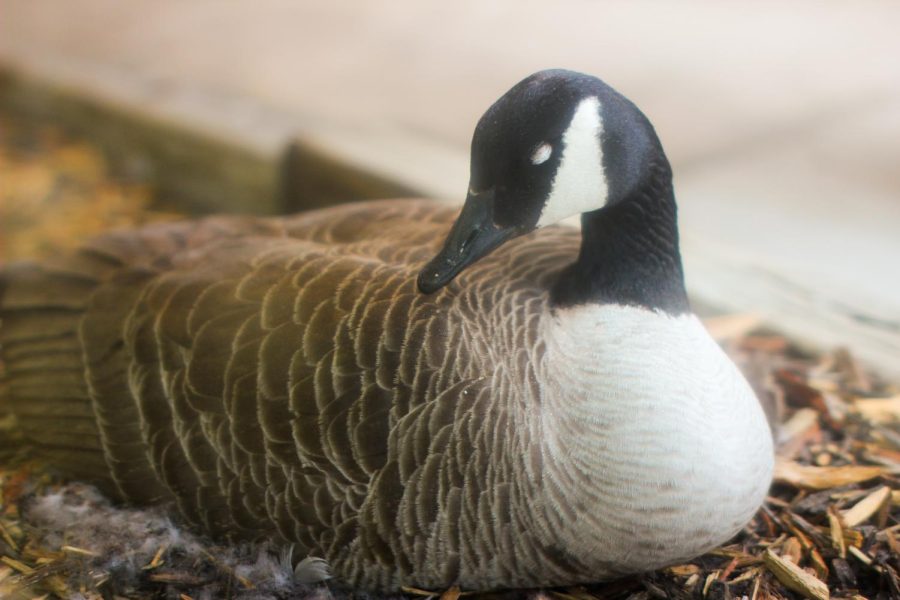 The flower bed between the front doors and the senior lot is once again a spring home to several geese, who take shelter to nest and hatch their eggs. They are a regular sighting to  students walking in the morning and can sometimes also be seen on the roof.

Although to some students, the geese can be a bit of a nuisance.

“I don’t have a problem with them, they’re cute. They had a brawl yesterday when I was in [state] testing. I couldn’t even focus on my test, I was looking at them,” sophomore Jerimaih Collins said.

The geese have been a regular presence in the spring for at least the last couple of years.

“I think they’re fine, as long as they don’t bother me,” sophomore Tayelor Jones said

Special education teacher Meredith Marlier has gotten to know a lot about geese from her involvement with the Kansas City Duck and Goose Rescue.

“Several years ago, at a different school where I taught, there was a goose that was limping so I reached out to some people and [they] came to help us wrangle the goose,” she said. “They told me when they’d be there so I went with them to try and help and then they mentioned other goose rescues they were going on so I thought, ‘well, since they were kind enough to help me, I can help them, and it has been five years and I’ve gone on all these random duck and goose rescues.”

According to Marlier, the geese probably chose the school because of its safety.

“It’s not uncommon for geese to set up nests in parking lots. They do it because there’s no other wildlife around. If you’re in the middle of an empty parking lot, you can see something coming for a really long time,” she said.

Geese usually return to the same place every year, to lay their eggs.

“They’re probably the same ones,” Marlier said. “They’ve found this spot and they like it, so this is where they come to make their nest and then they venture off and they’ll probably be back again next year.”

Marlier encourages students to enjoy watching the geese but not get up close and personal.

“I would just leave them alone. They’re just doing their thing; they’re not going to hurt anybody. A lot of people are afraid of geese because they say they attack. I have never been attacked by a goose,” she said.

While students’ first instinct might be to offer the geese bread, Marlier warns against this.

“Bread will actually expand in their stomach, it’s not good for them,” she said. “We do use bread when we’re trying to catch them because they really like it, but frozen peas, corn [and] things like that; that’s okay to feed them if you want to.

“I think it’s really sweet [that] they do mate for life,” she said. “A lot of times if we do take one goose in, you’ll find the partner because they’ll come a lot closer to you. Then when we release them back where we got them from, we like to stay and watch for the partner to come back again,” she said.

If the geese continue to feel safe here, they may keep coming back.

“This is where they feel the safest and their eggs have the best chance of hatching, so just keep it that way for them,” Marlier said.