Coach Callaghan has a talk with the players

Coach Callaghan has a talk with the players 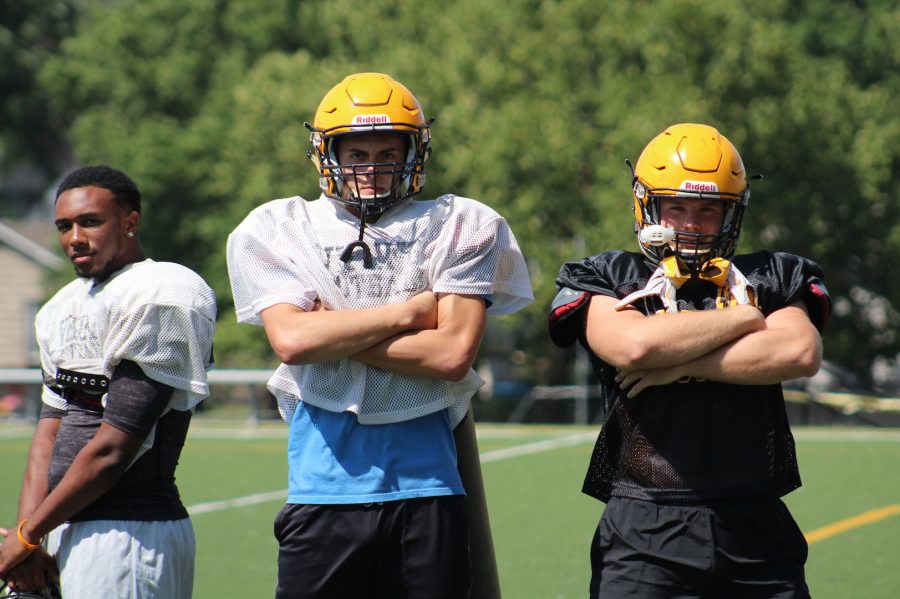 West’s varsity football team is a mere two weeks away from returning to the gridiron after a crushing defeat to Blue Valley high school in last year’s regional playoffs.

The team remains under long-time head coach Tim Callaghan, and they look to make use of several returning starters on both sides of the ball.

Among those linebackers is Jay Hawkins, senior, who led the team with 92 total tackles last year. He was also among the Sunflower League leaders in the same category.

“I put myself under a lot of pressure to do better every year,” Hawkins said.

Hawkins, along with fellow senior, Zach Witters have become leaders of a team that has somewhat lacked leadership over the past few years. One thing that is currently lacking on the team, however, is depth.

“They’ve got to stay healthy […] we don’t have a lot of depth so staying healthy is a big deal,” Callaghan said.

Last year, Witters played backup quarterback to the now college-bound Adam Rellihan, but still had significant playing time. In eight games played, Witters managed 462 total yards and seven total touchdowns. His role will be significant as his job will be to control the pace on offense, and to try and target the team’s most important asset: Israel Watson, senior.

Our motto is: never get too high or too low.”

Watson was one of the most versatile wide receivers in the Sunflower League last year, with 812 yards and five touchdowns. His combination of size, speed, and leaping ability makes him a cornerstone for West’s offense.

Hoping to also make contributions this year is Jason Meeker, senior running back. Last year, Meeker broke away for a 55-yard run on the first play of the season. The aftermath, however, was a tackle that left him twisting in pain; he suffered a broken fibula and dislocated ankle in his right leg.

But it’s Meeker’s ability to read blocks and tear through defensive lines that makes him such a exciting player to watch, regardless of past injuries.

“Meeker will be a lot better this year,” Hawkins said. “I think people forget how good he really is.”

Even though injury risks and lack of depth can prove problematic for the Vikings, their biggest challenge comes obviously from their opponents. Among the teams they play this year are Lawrence Free State, Blue Springs, and the always troublesome Shawnee Mission East.

“We have a tough schedule, but it will be worth it come playoff time,” Witters said.

Whether it’s risk of injury, or a tough regular season schedule, the Vikings face a tough road on their quest to win the state championship.

Sorry, there are no polls available at the moment.
Leave a Comment

The Voyager intends for this area to be used to foster healthy, thought-provoking discussion. Comments are expected to adhere to our standards and to be respectful and constructive. As such, we do not permit the use of profanity, foul language, personal attacks, or the use of language that might be interpreted as libelous. Comments are reviewed and must be approved by a moderator to ensure that they meet these standards. smwest.com does not allow anonymous comments, and smwest.com requires a valid email address. The email address will not be displayed but will be used to confirm your comments.

If you want a picture to show with your comment, go get a gravatar.