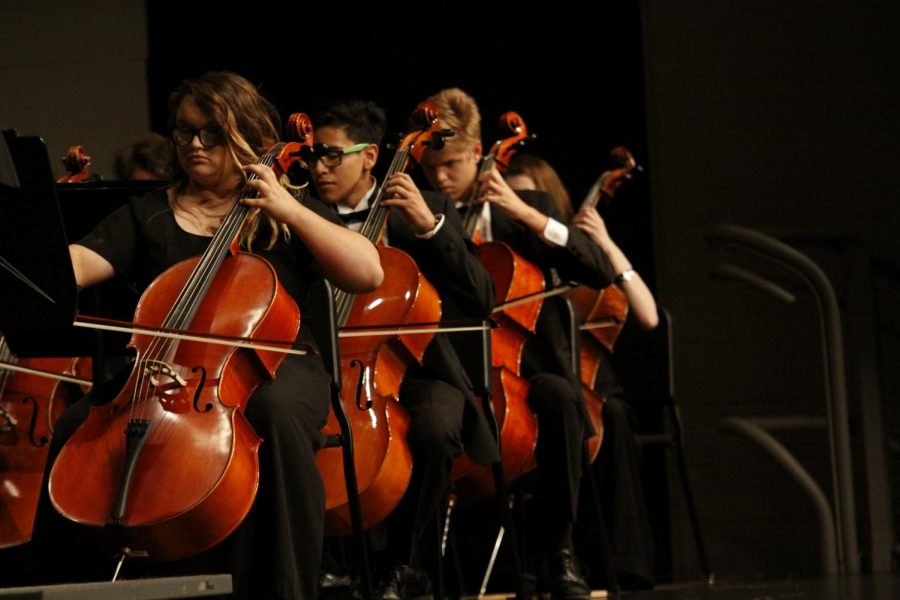 The Sounds of West

The extensive fine arts program, with classes ranging from Guitar to Jazz Band, as well as an inclusive and active Theatre Department, is enjoyed by students.

“I joined [orchestra] when I was in 5th grade, so I’ve been in for five years,” sophomore Kaitlyn Rongish said. Rongish is involved in choir and orchestra.

“I chose cello because I thought, ‘Oh, I’m gonna be a violin player.’ And then they let us play the instruments, and the cello was way better.”

“My brother was in choir, and he was really annoying and kept saying I was a bad singer. And then I said, ‘I’m gonna prove you wrong’.” Rongish said. Her reasoning for joining choir was a common theme.

“I wanted to play in orchestra because my brother was in band, and I didn’t want to do the same thing as my brother,” junior Kierra Tanner said.

“[Having the same teacher has been effective] because it wasn’t weird going into high school because you have all new teachers. It was nice having one consistent teacher. He knows me pretty well so he knows what I’m good at and what I struggle with.”

Curtis Mulvenon is currently the orchestra teacher, and he also teaches at Westridge. Other teachers include the band teachers, Dr. Bill Thomas, Kevin Hupe, and choir teacher Derek Cross. Sitting in Mulvenon’s room is a poster that shows the balance between practice, rehearsal, and performance – three key components to making music.

“I always manage to find time to practice, because I’m in the Kansas City Youth Symphony… It honestly doesn’t take over my life, it just adds flavor,” Tanner said.

“I’ll go through periods of time where I’m spending two hours a day on music, and then I’ll go through weeks where I’ll do nothing. I think that’s just how the creative juices flow… Motivation is just hard to maintain,” Rongish said.

In a student’s life, they need extracurriculars. Fine arts, particularly the music program, is one of the ways to get involved.