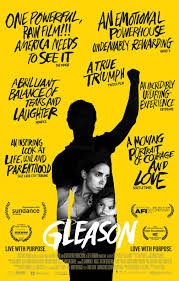 This is the most heart-wrenching documentary I’ve ever seen. It follows former Saints player Steve Gleason as he’s diagnosed with ALS–what ensues is a devastating, in-depth look at the life of a New Orleans legend whose been reduced to a wheelchair. The bulk of the film comes from personal footage shot by Gleason, who began making a video diary when his wife, Michel became pregnant. Seeing Gleason gradually lose his ability to walk and speak is heartbreaking. Not to mention his wife Michel, a hero in my eyes, eventually has to take care of both him and their son. “Gleason” is an incredible film that will break you down and bring you back up again.